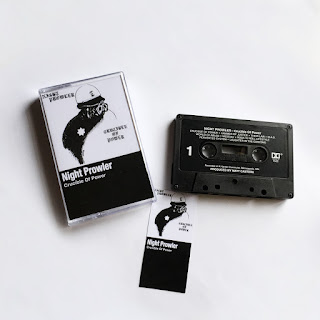 .
After a few years of silent hibernation, the Night Prowler slinks out from it’s cave to visit it’s trademark brand of menace upon the unsuspecting public one last time. Crucible Of Power is the fourth and final chapter in the Night Prowler narrative, drawing to a close a near decade long obsession with meat and potatoes hardcore music, crime, social control, clandestine government operations, megalomaniacal lunatics, the behind the scenes machinations of 1960’s American history, and the dog-eat-dog realities of a violent society.
.
Recorded and mixed at A Harder Commune - Minneapolis, MN
Engineered and mixed by Matt Castore
Mastered at Audiosiege Mastering - Portland.
Cover illustration by Frank Cieciorka
Released on cassette in North America by KRAM Records
.
Co-released with Bullwhip & Hardcore Detonation.

pissed off records!
Malaysia
Any inquiries regarding wholesale or possible trades are welcome. :) Please email me at pissedoffrecs (at) gmail.com